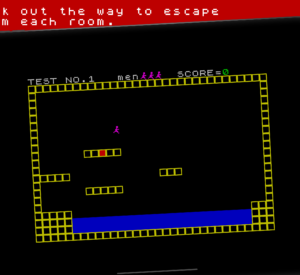 the greatest type-in game from 1984 is back!

You play the part of Dotty the kangaroo who has been put on a course to test his intelligence and physical ability.

Originally written in 1984 for the 16K ZX Spectrum by Ian McTavish, aged 14, who was a pupil of Bristol Grammar School, Shirehampton, now back on iOS and macOS.

For the YouTube channel hotdog soup the original ZX Spectrum version of the game was recreated for iOS and macOS. This was my first and favoutite type-in game that was printed in Sinclair Programs magazine, issue 23, september 1984. I typed it in and had many days of fun, adding my own levels to it and making the kangaroo jump higher.

• Guide Dotty through four levels by jumping on the platforms
• Open the door by reaching the red block
• When all levels are completed, the game gets harder
• Touch screen control on iOS, original keyboard controls on macOS